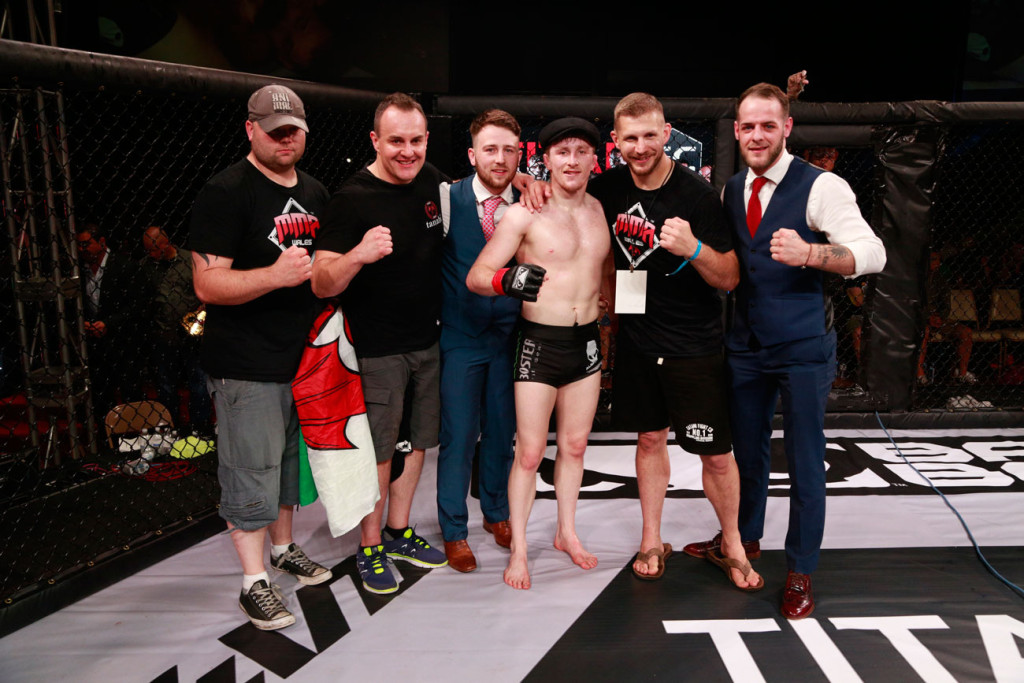 Titan FC 34 took place this past Saturday night at the historic Scottish Rite Temple in Kansas City, MO. This was the first Titan FC event streamed live on UFC Fight Pass in a newly signed deal which will allow its fighters to move up to the UFC and vice versa.

Unbeaten Welsh fighter Brett “The Pikey” Johns (12-0) defeated former TUF contestant Anthony “Sharkbait” Gutierrez in what should’ve been Johns’ Bantamweight title defense, but he was stripped of the belt on Friday after he failed to make weight due to a sudden stomach bug, and the belt was only on the line for Gutierrez. 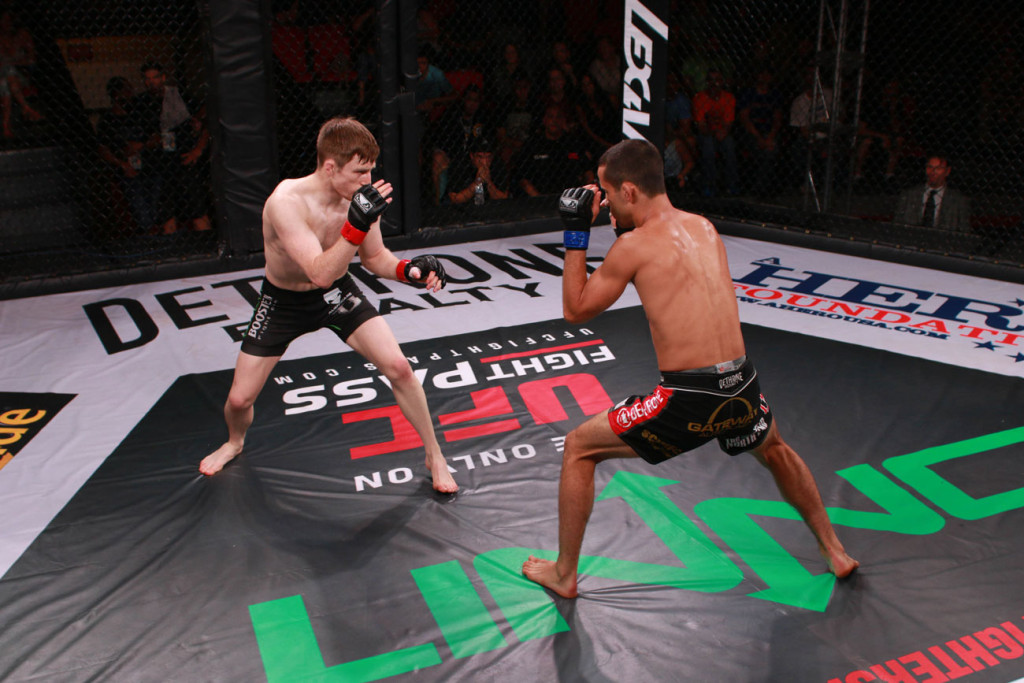 Brett “The Pikey” Johns faces off with opponent Anthony “Sharkbait” Gutierrez in Round 1 on Saturday night in Missouri.

Unfortunately for Brett Johns, coming to his defense against Anthomy Gutierrez over the Bantamweight limit cost him his belt on the scale, however, the ‘People’s Champ’ kept his perfect professional record intact by implementing ground and pound to take the first round and was literally fighting on one leg by the fifth, but his heart and his ability to keep his pace up earned him the better end of a Split Decision win, as well as another title shot. The official results were 47-48, 48-47, 49-46.

Johns has no qualms about a rematch for the vacant title against Gutierrez at Titan FC 35; the young fighter is fearless in his quest for UFC glory and will stop at nothing until he achieves his feat.

Titan FC CEO Jeff Aronson said after the fight, “I jumped out of my seat. Brett Johns is just an amazing figure. He is the toughest little guy I think I have ever met.” 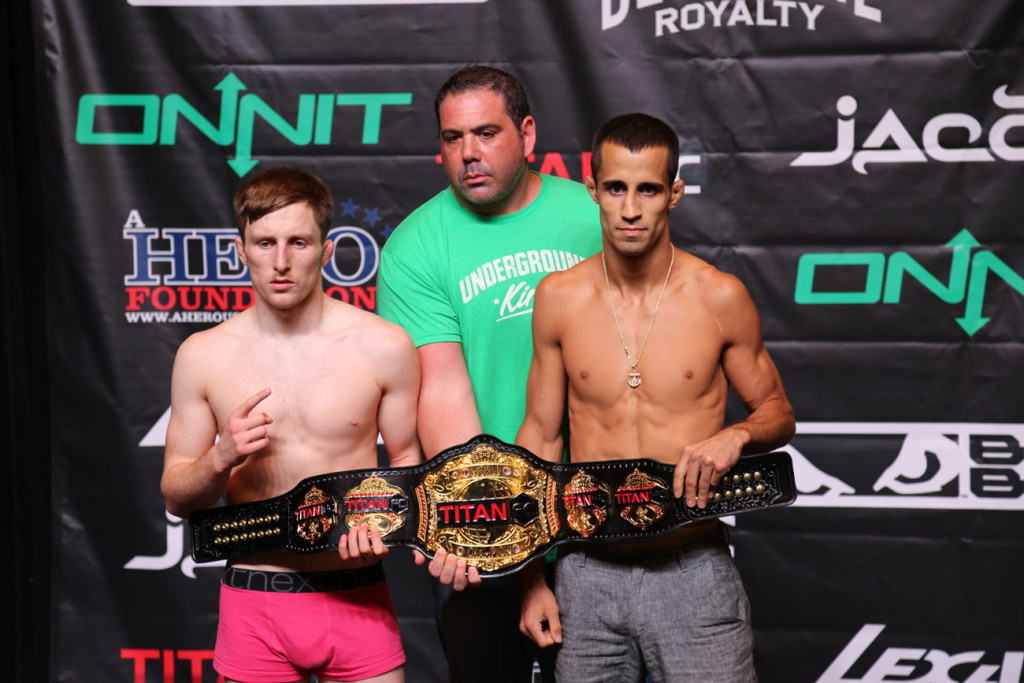 Titan FC CEO Jeff Aronson during the Johns Vs. Gutierrez weigh in on Friday night. While Johns didn’t make weight and was stripped of the title, he went on to win the bout opening up another title shot rematch in September.

The 23-year-old Swansea native is continuing his 2015 campaign firing on all cylinders and standing in the best position of his unbeaten career. Currently, he is ranked #20 in the top 50 prospects outside of the UFC according to MMALatestNews.com. The ‘Welsh Warrior’ stamped his place on the larger MMA radar in MArch by defeating former UFC veteran Walel Watson to capture the Bantamweight title at Titan FC 33, while Gutierrez rebounded from a loss to Watson with a third round TKO of Austin Lyons in his last outing.

The two fighters will face an immediate rematch in September at Titan FC 35 for the vacant belt in what will be another epic battle for glory, allowing unbeaten Johns another chance to be crowned Bantamweight World Champion. 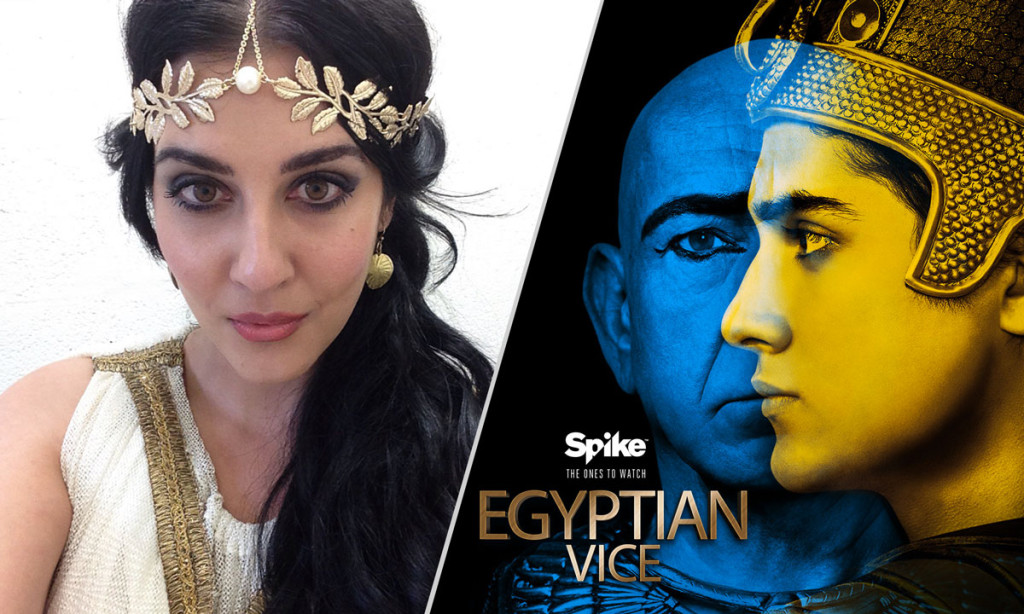 South Wales-based Samira Mohamed Ali was born and raised in Dubai but moved to Neath when she was in her early teenage years. The model and presenter will star in the ancient Egyptian drama documentary after only discovering her acting talents and breaking into the industry a few years ago.

Her latest acting role will see Samira play the iconic Ptolemy, the king’s sister in the Egyptian Vice, which will be an educational preview for the highly anticipated mini-series ‘TUT’ that stars Sir Ben Kingsley and also premieres on Spike TV later this month in the USA and Canada.

“I was extremely honoured to be headhunted for a role in such a huge production,” said Samira.

“Receiving the script was so exciting and it’s been one of my most challenging yet fulfilling roles to date. I don’t want to give too much away but if you expect an ancient Egyptian version of Game of Thrones then you won’t be disappointed! ”

The first-part of Egyptian Vice will take an in-depth look at the sins of Egypt, where the drama documentary will touch upon the extravagant and vice filled lifestyles of the wealthiest rulers in ancient Egyptian history. The second installment of the two-part event delves into the rulers of Egypt and the darker side to those who shaped Egyptian civilisation into the icon it is today.

Since her first acting role in the horror film Spirital Phantoma (2012), Samira has also starred as an alcoholic mother in the award-winning horror Molly Crows (2013), and as Dr. Elizabeth Santer of this Autumn’s release of Tanabi Films’ screen adaption of best-selling novel By Any Name (2015). As well as her established acting career, Samira is also a successful businesswoman and is VP of Tanabi Group, which is based in Swansea, as well as Miami, USA.

The former model and presenter utilises her role as a producer at Tanabi to encourage big productions from overseas to come to the UK to support the UK film industry and economy.

Following her work the UK film industry, Samira has recently been invited to the House of Lords for a private meeting to discuss exciting plans for the near future.